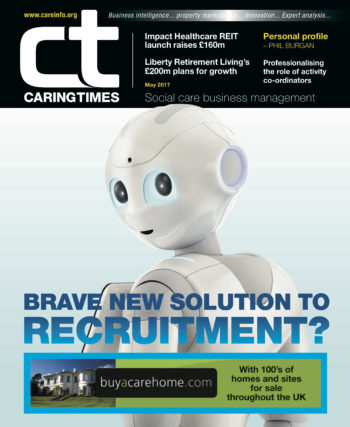 Phil Burgan began his working life as a pharmacist, an entrepreneurial pharmacist who built a group of 38 pharmacies in nine years.

“Then I was still only 43 and wanted something else to do,” said Phil. “I knew something about the care homes business because we supplied monitored medication systems to about 50 homes – we were early pioneers of that.  I bought four converted homes between 1996 and 1998, probably paid too much money for the first two, but you live and learn.”

Phil then went off International motor racing for five years, leaving the running of his care home’s to a lady who gad formerly managed his pharmacies.

“I was on the periphery of it as a non-exec really. We had a few goes at growing the business but there was so much turmoil in the late 90s; you had Omega, Advantage, all those people go to the wall and then the Government imposed some draconian physical standards for homes which hardly anybody could meet.People like Bupa were shutting homes left right and centre and I think 100,000 beds disappeared, which was 20% of the market.

“Then the Government realised they’d made a mistake, and applied the physical standards just to new build and the market corrected itself. Over-capacity had gone, local authorities started giving 6/7/8% fees because they needed the places and I then thought well actually there’s a business here now.

In 2005  local authority fees were starting to taper off and inflation had begun to exceed fee rises. Phil sold some of his homes and began buying and building in affluent locations for private fees.

At the same time, he bought a company called Autism Care UK and went into the specialist sector, and grew that as well.

“By 2010 we had not made many acquisitions, but we started building new homes on forward funded sale and lease back with Medics at the time, built up a good relationship with them which we still have and then the Southern Cross opportunity came up in 2011 and the question was ‘do I go back into that market?’ But the entry price was so low.

“The first two years’ profit went straight into the fabric of the buildings.  That wasn’t a challenge, we just had a programme and we did it. The challenge was getting 2500 people who thought one way to think another way; most of them didn’t make it.”

By year three, Phil and his team had built a good business, increasing the private-pay element. Then in 2013 Phil went on the Peking Paris Car Rally which included nine days across the Gobi Desert in a 1959 Volvo.

“That was  the hardest thing I’d ever done,” he said. “But after 11 days driving on the trans-Siberian highway across Russia it gives you a lot of thinking time, in between avoiding the big wagons. The banks were squeezing us to amortise the debt more quickly and I knew I had to make some changes.  So I went to Rothschilds, got on really well with the. Around that time was when the REITs were coming into the UK, so we did a deal with HCP REIT and sold and leased back 23 freeholds and paid off all our debt and it left us a few quid afterwards.  It enabled me to split out Autism Care and subsequently somebody came in for that so we sold that very profitably in 2015 and we’ve subsequently made a couple of acquisitions with HCP’s money and we’ve carried on developing quite a lot and now we’re bulking out the Group with acquisitions.

“We made a big acquisition in November, we’ve got another one coming on, which will happen in April/May. And we are building new homes outside the business. We have an £11m development in Hampshire which is coming out the ground now and there’s two more about to start, and that’s where we are at.”

I asked Phil what he thought the next four to six years might bring and he predicted a lot of care home closures.

“There will still be people like us who are building new homes, predominantly for the private market, predominantly in the South East, all fighting for the same sites. There are still brave people building things in Preston, Newcastle etc – good luck to them!

“I can’t see any end to the difficulties in recruiting and retaining staff and the big drive of course is towards quality of care, which is great.  I’ve not met anybody in our sector who has moaned to me about having to deliver better care.”

“I think there’s a balance change needed from the regulator  There needs to be some allowance for the fact that we employ human beings and occasionally human beings make mistakes.

“If you’re a bin man and you make a mistake it’s okay. If you’re the NHS and you make a mistake, it’s okay because it’s the NHS. If you are a charity, it’s okay because it’s a good cause, but if you’re a privately funded commercial business you are bad. ‘Look at you making all that money and profit, not giving good care’ –it’s commonly believed that we make massive profits, but we don’t.” 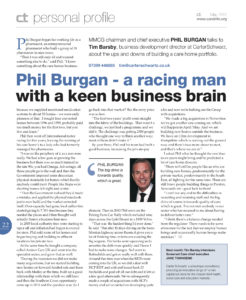