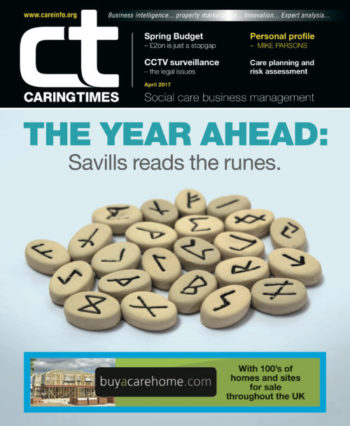 As a provider of neurological care and neuro rehabilitation for people with progressive or acquired neurological conditions, PJ Care specialises in the multidisciplinary care of adults and operates facilities in Milton Keynes, Gloucester and Peterborough. While the care is specialist, PJ Care chairman Neil Russell describes himself as being the opposite. “I’m a generalist,” says Neil, a former diplomat with the British Foreign Office.“I know a little bit about enough things to get myself into a lot of trouble!” “In the growth of the company I’ve done just about every job. I run the rule now that anyone I employ in a specialist role must be better than me at it because they are supposed to be a specialist and I’m a generalist. “I believe very much in what we do, the people we look after and giving them the best quality of life we can possibly give them – this sounds like standard marketing speil but it’s actually the heart of what we do. We are a family business and we try to get the company culture into all the staff. It can be a challenge to get the right staff because having the necessary skillset is one thing, understanding and being able to embrace the environment is an entirely different thing, but it is just as important as having the skills. Ours is a unique care model. With the young onset dementia, which is where we started, the people we take on are very challenging. Very few care providers can do what we do.” PJ Care’s objectives are set by the senior management team and this, says Neil, makes those  objectives very diverse. “Each month we sit down with 12 randomly selected members of staff – housekeepers, carers, the occasional nurse, matrons, kitchen assistants etc. I sit have a blank pad in front of me and say ‘okay what do you want to talk about’. “Because you’ve got such different personalities and such differing role , you come up with some really clever and innovative ideas that, if we weren’t sat around the table, we wouldn’t come up with (ourselves).”

PJ Care is about to launch a mobile care system. Two-and-a-half years in the design, Neil says it basically replaces the written care plans. “You put in something like ‘Fred should have a shower between 8.30 – 10am in the morning’ and if Fred hasn’t had a shower by 10.15 the system pings the nurse in charge. The carer that Fred’s been allocated to is then sent a reminder. “The system takes everything from when the sales team first gets an enquiry, so they can start putting the information in through the Customer Relationship Management package. Then a nurse will be sent to do an assessment, using an iPad. Previously it was all handwritten, and would have to be typed up when they got back. “Now the nurse can do that at the hospital, press send and we have the information and the pricing before our assessor has even got back to PJ Care. Then the nurses on the unit the resident will be going to can see immediately who is coming in, and start doing the risk assessments, the care planning and everything else and get it all ready for the admission.” The system also gives head office a real time understanding of what’s happening. “A relative phones up to say ‘my dad’s told me he hasn’t had a shower since he’s been there’ and, rather than saying ‘let me look into it and get back to you’, I can look at our online system and say ‘yes. he had a shower this morning and yesterday’. I can give those responses immediately.”

Neil says the biggest change he has seen is the amount of regulation. “Some of it is needed,” he said. “Most of it is really badly written, which makes it very difficult to work with. There should be good, clear, concise legislation which sets out the rules. The Mental Capacity Act is just a mess; people interpret it in different ways. And we get inspected by about five different bodies every year, which never used to happen.”

Neil is doubtful whether a company such has PJ Care would survive as a start-up in the present commercial environment. “There are fewer people getting into care now because it’s a good thing to do, which is why my Mum got into it – she saw a need and wanted to meet it. But there are so many conflicting challenges; repaying your investors, paying your staff – minimum wage is going up 4% in April and another 4% in October. Meeting  bank covenants, investors’ covenants and everything else. Then local authorities and health authorities are driving prices down and everyone complains because the care is poor. It compromises your integrity and you just can’t meet all of those challenges. I think if we started out today we wouldn’t make it. We’ve got the infrastructure and the reputation, but if I started a brand new company and phoned a commissioner up and said’ I want you to pay £1800 for me to care for this guy’, they are going to laugh – it’s not going to happen.” 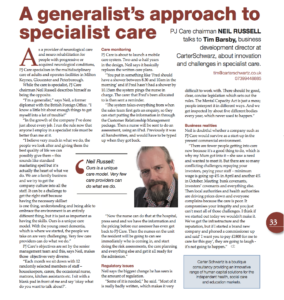