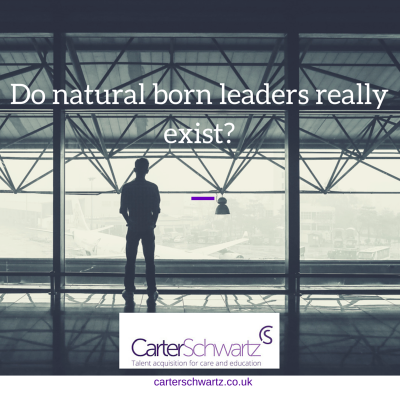 It is a question as old as time itself, are leaders born or made? Commentators have long pondered this and simply typing the word ‘leadership’ into a search engine will return literally thousands of so-called definitions as to what makes a leader.

The business consultant Peter Drucker said that “Management is doing things right; leadership is doing the right things.” Dwight D. Eisenhower for his part suggested that “Leadership is the art of getting someone else to do something you want done because he wants to do it”, while Goethe said “A great person attracts great people and knows how to hold them together.”

Whatever your definition, there does appear to be a set of commonly recognised traits that we all attribute to great leaders – confidence, visibility and innovation. But can these traits be learned or are true leaders simply born with them?

In a previous article, we talked about how introverts make better leaders than extroverts and we quoted Adam Grant, professor of management and psychology who suggests that “introverted leaders tend to listen more carefully and show greater receptivity to suggestions, making them more effective leaders of vocal teams.”

Of course there is no doubt that some people are naturally more adept to leading than others, but that doesn’t rule out those without the ‘usual’ management personality traits.

Indeed, someone who may appear unconventional and lacking natural confidence may not initially be seen as a realistic candidate. However, if they have the industry knowledge and experience, there is little reason for them not to lead.

Bill Gates is one of the most recognisable leaders from the 20th century, yet for all intents and purposes he never really fit the mould of a ‘leader’. He’s far from a bad speaker, but he’s also not brimming with the charisma of someone like JFK. His success came from his exceptional knowledge of his product and technology in general – something that sees the ‘confidence’ element of sound leadership replaced with ‘competence’.

Indeed, a University College London study found that, “What determines whether an individual occupies a leadership position is the complex product of genetic and environmental influences.” Confidence is great, but competence is equally important.

Graham Mole makes a great point in his chapter in ‘Leadership in organisations’, saying that the idea of a ‘born leader’ is a term that has stuck around despite a distinct lack of evidence to back it up.

Some people will always have attributes that translate well into the world of management, but that means very little if their knowledge of their sector, the challenges and nuances it faces and their staff that they are responsible for is mediocre. Differences in the structures of businesses, and the services that they provide, mean that no one leader can be the same.

So is the notion of an ‘ideal’ leader a myth? Perhaps it is but if we had to attempt a description of our own we would say that a leader needs to blend charisma with intellect. That said, the only way a leader can truly gauge the correct approach is through experience – which no one is born with.