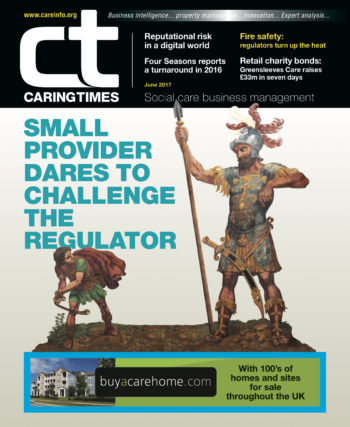 From an entrepreneurial background of running her own business, Jane Townson’s plan to turn her individual nutrition consultancy into an online network of advice for a better diet was sid tracked by becoming the chief executive of Somerset Care, a not-for-profit provider which operates 29 care homes across the south of England, along with homecare and a range of other support services.

“Many years ago people who came into care homes were quite fit,” said Jane.

“They’d drive their own cars, bake cakes and food wasn’t such an issue. Now we’ve got very frail, elderly going on 90-plus year old residents with advanced dementia, all kinds of special dietary needs including problems with swallowing and diabetes, so food has  become quite technical and quite difficult. Consumer expectations are going up all the time and justifiably – if you’re charging people money for care they want high quality food which is such an important part of the day.

“We employ a food and catering lead who takes control of the food but as chief executive I cannot get as involved as maybe I’d like. We’re not competing with restaurants yet but my biggest effort on the food front is in our new home in Bridgewater where we’re experimenting with a new model of catering that looks to cater for our residents by pushing their food expectations up.”

A care home is a home

“I want them to be like a home,” she said. “In hotels people do things for you which is OK up to a point but actually you can end up disabling people which is the opposite of the model of care we’d like to see.

“Our residents peel the carrots at lunch time, do their own washing; it’s more of a household model. At home, you don’t sit down all day playing bingo and making paper flowers. Most of us are doing jobs, gardening and that gives people meaning and purpose to do things that are real. It’s not just entertainment, if we have a garden bench that needs painting we’ll let a resident do it because when they’re finished they’ll feel so good that they’ve done it because it’s something that needed doing.”

Jane said many people in the care sector are obsessed with risk, worrying about what the regulators will say if they try new things that might be beneficial.

“They end up cloaking people in cotton wool and not allowing them to do anything,” she said. “I interviewed for a home manager for one of our homes and he got the job because of this story; he had a resident who was 99 and wanted to skydive for her 100th Birthday – the GP said no, the family said no but ‘Bill’ said why not? She wants to do it so why not?! You don’t say to your children, don’t go on the swing because you might fall off, we believe if people have capacity, you let them make their own decisions – even if they’re bad decisions, we all make bad decisions, that’s just life. This attitude is what we adopt, within reason, to promote that independence, to give agency, not to just plonk residents in a chair.”

“When I was in the NHS I was head of whistle blowing and I saw what happened to people that did that and it wasn’t positive.

“You need to be focused on a willingness to speak truthfully, openly and honestly. I’ve been shocked to see that some don’t have this focus because there is a climate of fear in the health and social care sector. It has led to a conspiracy of silence where no one is willing to blow the whistle.

Jane said her team had found that enabling residents by teaching them how to use skype, Google Earth and email has had a tremendous impact on their wellbeing.

“Simple things like being able to watch youtube video’s and contact relatives. All our homes have wi-fi. We’re also exploring hiring a fleet of electric cars for our homecare staff. We’ve looked at water recycling and many of our homes have solar power taking the strain of the energy bill.”

Is there something the sector should be working towards together?

“Yes; There is huge power in the truth, the whole of the healthcare sector should be working towards true candour, courage and being focused on the people we’re serving.” 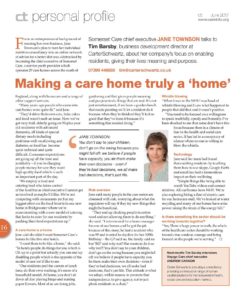