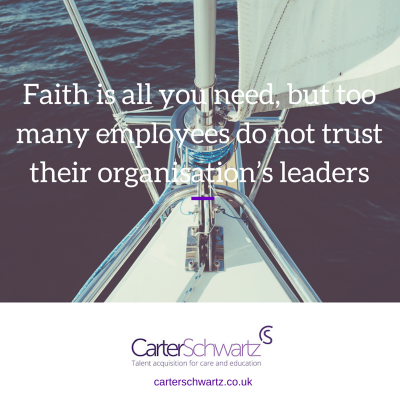 It is said that an organisation’s most valuable assets are it’s people, yet there has been a plethora of research recently that suggests a growing disconnect between those at the top of the organisation with those underneath.

The 2016 Edelman Trust Barometer, a global survey of over 33,000 organisations across 28 countries published in April, found that there is a widening trust gap between ‘regular employees’ and their Board-level superiors.

Accordingly, just 64% of executives, 51% of managers and 48% of rank-and-file staff state having trust in their organisations leadership. The primary criticisms were the belief that leadership teams focus too much on short-term financial results (67%), and not enough in creative a positive long-term impact for the organisation (57%) or job creation (49%).

Perhaps more worrying is the revelation that although 50% of respondents stated that it is important to have a CEO who exhibits highly ethical behaviour, only 25% saw this behaviour in their own CEO.

These findings echo those from research conducted by Zone2 in 2015. It found that almost half of all UK workers have left a job due to poor leadership. Of the 1,048 people polled, 40% of respondents stated that they felt their bosses didn’t have the leadership skills necessary for the role, whilst over half (54%) said that their boss didn’t have a positive attitude.

This matches research conducted by the Chartered Institute of Personnel and Development (CIPD) in 2013, which surveyed nearly 3,000 employees and found that there was a prevalent ‘us and them’ culture within most businesses.

The CIPD research found whilst staff largely had faith in supervisors and lower-level managers, less than a third believed in the top bosses of their organisation. However, this lack of trust didn’t seem to be reciprocated by those in higher up positions, who held a ‘blinkered’ view that trust levels were high in the workplace.

So why does this disparity exist?

We have spoken extensively about the importance of ensuring the lines of communication with organisations extend beyond the boardroom. What these studies show is that the days when leaders would speak and all employees would immediately fall into line have long been consigned to the history books.

Today’s employees want to ‘get’ what their leaders are all about – what they stand for, their values and even the personal journey they took to get them to where they are now.

By shifting the focus away from achieving short-term business success and more towards taking a longer term view and effectively communicating the overall vision and mission of the organisation, leaders can exert greater influence within their teams; the more engaged an employee is with the organisations the greater their motivation, commitment and productivity levels.

As the authors of the Edelman report noted, “There is now a disconnect between authority and influence…as long as employees don’t trust their employers, employers cannot trust what their employees say.”